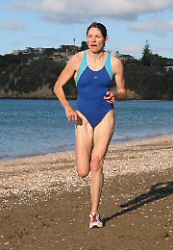 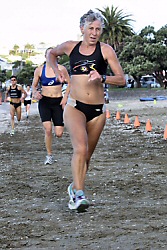 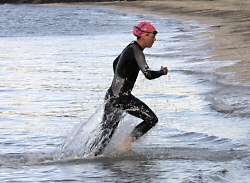 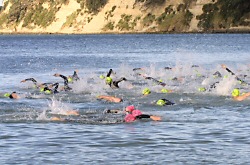 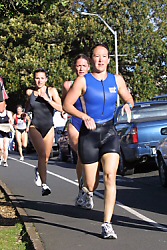 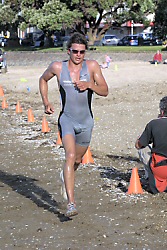 If you’re looking for action on the Auckland waterfront then the fortnightly Stroke & Stride events are tough to beat.  If you want to turn up the excitement another notch then add a sprinkling of athletes direct from the world stage to the already very potent local scene.  The strong men’s field at Race #2 in the Reesby & Company Stroke & Stride Series was enhanced by the presence of a couple of outstanding athletes direct from the world stage looking to mix it with the battle-hardened St Heliers Bay regulars.

On a fine Auckland afternoon the 750 metre swim was not as easy as first impressions may have had you think.  The combination of an outgoing tide, a small chop between the two cans and sun in your eyes all added up to slower than normal swim times for this distance.  Slower she may have been but Rebecca Nesbitt was still out in front of the women’s field at the end of the swim leg; running up the beach in 10min 49sec, hotly pursued by previous Series Champion, Kirsty Whiting also clocking under 11 minutes.  Then followed a strung out pack including Rosemary Everitt, Amy Brookes, Brooke Dobbs, Jennifer Cooper, Vanessa Palmer, Brooke Pattle and Carmel Hanly and the always feared Nicole Cope recording just under 12 minutes.

Just two weeks earlier Nicole Cope couldn’t start at Race #1 because her legs were still recovering after her victory at the Auckland marathon.  A bit of R&R must have done the trick and all those miles in training certainly hadn’t dulled her legendary leg speed as from the outset of the run she proceeded to overtake all in front of her.  Kirsty Whiting held the lead through the middle stages of the run out to Mission Bay and return but even her experience couldn’t hold off the hard charging Nicole Cope as she swept into the lead and strode up the beach to another victory on the Auckland waterfront.  Kirsty Whiting claimed second place while third and fourth went to the evenly matched, Carmel Hanly and Rebecca Spence separated by just 4 seconds; exactly the same 4 seconds that separated them after the swim.  Nikki Wallwork was another to run well to finish in fifth place.

The men’s field on the beach faced the same swim some 10 minutes later. Enduring Series Champion Brent Foster revelled in the conditions; currents, chop, sun-strike only make it more fun for Fozzie as he once again jumped away from the hounds early on and returned to the shore in 9 minutes and change and more importantly holding a 21 second lead.  Heading the chase pack was Morgan Wardrop and like last fortnight it was Terenzo Bozzone handily placed ahead of Robbie Baff, Bryan Rhodes and Will Green.  Swimming with these guys was the first of our international guests, Victor Plata from the USA.  Then came Sam Walker and Thomas Hahn with former Stroke & Stride winner; now the ultimate global athlete, Paul Amey in tow.

If anyone was going to deny Brent Foster success in this event then they’d need to move fast, as his lightening fast transition from swimmer to runner hardly slows him at all before he’s eating up the road on the 4 kilometre run on his way to one more classy victory.       In Race #1 Terenzo Bozzone finished just 5 seconds behind Brent Foster, however this time he couldn’t dent the lead but he was all smiles at the finish with another fine second placing ahead of the much vaunted opposition.  Sam Walker is another big improver this season scoring third place ahead of Victor Plata and Ben Pulham.  Paul Amey was sixth and promised to return later in the season without the hangover of disembarking from an international flight just hours before race start.

No surprises that Brent Foster again sits atop of the Series Grand Prix and with two wins from two starts he’s looking as indomitable as he has for the last decade.  Perhaps young guns, Terenzo Bozzone, Sam Walker and Liam Scopes can challenge but they’ll need to win a race or two between now and the end of the summer to mount a serious challenge to the reigning champ.  Consistency is the other key component to taking out the title of Stroke & Stride Series Champion and early in the season it is Carmel Hanly with two podium finishes leading her nemesis Rebecca Spence by four points this time.  Nikki Wallwork holds third ahead of Nicole Cope, Vanessa Palmer and Samantha Warriner all tied up on 20 points.