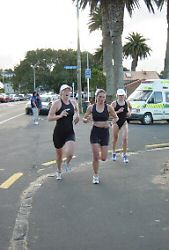 The first race of the season is the time when a lot of questions are answered after the winter off-season. Who’s improved? Who’s got faster? Who’s got a little older and is slowing down? Who’s a year older and is using that experience to go even quicker? Who has had a holiday from training for the past six months and won’t be fronting? The season opener in the Reesby & Company Stroke & Stride Series answered many hundred of those questions as athletes competed for the first time this summer.

So often the weather is in question for these early season events with adverse conditions an almost traditional start to the Stroke & Stride season. We can happily report that for this year it could not have been better with Auckland City bathed in warm sunshine, the Waitemata Harbour at it’s sparkling best and those notorious spring winds taking the afternoon off.

It was one of the biggest women’s fields ever seen spread across the sands at St Heliers Bay in their brightly coloured swim caps awaiting the start of their 500 metre swim. This distance is never going to be enough to split up the field dramatically but it was still sufficient to give perennial swim favourite, Rebecca Nesbitt a jump on the rest of the field and an 8 second lead heading up the steps into transition in 6min 25sec. Hunting her down and using the smooth sea conditions, their wetsuits and experience to maximum advantage was previous Series Champion, Debbie Tanner and current Series Champion, Samantha Warriner ahead of a strung out pack of swimmers. Also in contention at his point were Anna Elvery, Rosemary Everitt, Rebecca Spence, Ainslie Savage, Brooke Pattle and Vanessa Palmer. While hovering just off the back were Carmel Hanly and Nikki Wallwork both now looking forward to the big 5 kilometre run to up the pressure on those in front. Out on the run course it was all Samantha Warriner as she exploded out of the transition, immediately went to the front of the field, extended this lead to the turn at Mission Bay and then coasted home for an easy victory. Nothing like continuing on your form from last season with back to back wins eight months apart. If that was firing a warning shot, then it hit her opposition right between the eyes. Also tearing up the run course was Carmel Hanly as she had the race of her life and her best result ever striding through with a fine second placing. In fact after of our winner, the top five female finishers were showing remarkable form early in the season and all recording personal best placings. Young Rebecca Spence showed maturity way beyond her years as she raced herself into third while behind her it was a three-way battle to the line with Nikki Wallwork managing to get past Ainslie Savage and Vanessa Palmer in the final metres of the run.

Back on the beach the men toed the sand at the start line with all eyes on legendary Brent Foster back to defend his title after a decade at the top. If Fozzie was ticking boxes on his wish list then a short swim, dead flat sea conditions, wetsuits all around, an injury through the winter and a long 5 kilometre run was certainly not what he would have favoured. But if winning Stroke & Stride events has become a habit then he has also made a habit of doing everything right, racing the perfect race, no mistakes, never letting his guard down. In a race lasting 20 odd minutes there is often no chance to recover from an error. Brent Foster positioned himself perfectly at the start which helped him jump away from the chasers early on which he extended to a 14 second lead by swim’s end, clocking 5min 51sec. Looking to end our current champions dominance of this Series was a group of young contenders towed into the beach by Terenzo Bozzone, Will Green and James Elvery. Just behind came Sam Walker, Scott Larsen and Bryan Rhodes and then a seemingly continuous stream of swimmers emerged from the sea over the next five minutes.

Running fast after swimming is not the most pleasant sensation to put your body through and running as fast as you possibly can immediately after the swim is not something most care to contemplate but certainly the words excruciating and agonising would be descriptive. All these guys now had this prospect ahead of them if they wanted to win the first race of the season. Astonishingly Brent Foster extends his lead early on in the run while being pursed by some of the fastest runners in the sport. James Elvery and Terenzo Bozzone run side by side chasing down victory but it is not until the later stages that they finally dent his lead while Liam Scopes is also displaying his running prowess as he moves up through the field. At the finish it may not have been expected by all but it was indeed the hard-charging Brent Foster claiming one more Stroke & Stride victory. Making that victory one of his toughest ever was the first of the young guns, Terenzo Bozzone just five seconds back clocking the fastest run of the day and then his colleague, James Elvery another few metres in arrears. Liam Scopes ended up capturing fourth while Sam Walker launched his season in style with a fine fifth place finish ahead of a classy men’s field.