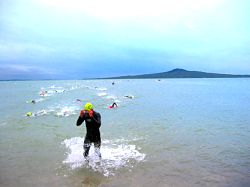 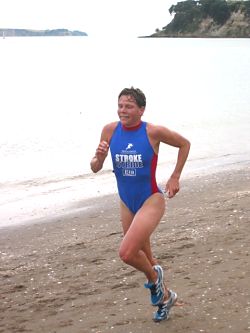 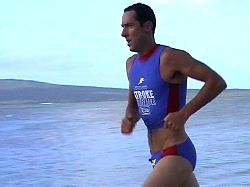 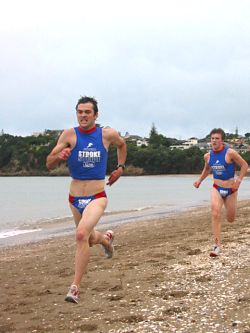 The second to last event in this summer’s Reesby & Company Stroke & Stride Series was critical for those wishing to cement a top placing in the Series Grand Prix as it was the last chance for a competitor to top up their tally of points before the “must do” final race next month. And once again the Auckland weather was to prove as much a foe as the competition in the battle to the finish line with a gale force wind blowing buffeting the town throughout the day. Fortunately the wind direction was at least favourable with the howling offshore leaving the water as flat as a pancake for an undisturbed 750 metre swim out around the cans and back into the beach.

Leading the way for the females in the Pro Division were those stellar swimmers Anna Cleaver and Rebecca Nesbit with a 30 second lead running up the beach into transition; Anna Cleaver then lead the way out onto the 5 kilometre run course along a windswept Tamaki Drive to Mission Bay and return. It was an ominous sign for the rest of the field as current Series Leader and winner of the past two races Samantha Warriner had already opened up a small gap to the rest of the chasers and headed off onto the run in second place. She was followed out by Marisa Carter, Debbie Tanner and Taryn McLeod who had only a half a minute lead over a couple of renowned runners in Nicole Cope and Fiona Docherty.

Meanwhile the men’s field were also being blown rapidly around the swim course and the first Pro back on dry land was Oliver Tompkins with a handy swim split of 9 minutes 24 seconds giving him a handful of seconds lead over the pursuers including James Elvery, Dean Foster, Bevan Docherty, Thomas Hahn and Carl Cairns. Victory in the first six events of the season had been shared between Brent Foster and Hamish Carter but both were absent from today’s race leaving the door open for a first time winner for this season. As the runners charged out onto the run they were all eager to make that victory their own and secure the maximum points on offer.

The blustery wind may not have affected the athletes in the water but out on the road it was certainly making it’s presence felt as it gave them a firm shove from behind on the way out to the turnaround. Regrettably this added impetus would be paid for big time as once the turnaround was reached the helping hand reverted to an invisible wall hindering the return to St Heliers Bay and the finish line. Wall of wind or not, Samantha Warriner showed her strength out on the road was on a par with her strength in the water as she pulled out the fastest run of the day to claim win number four in the Series with a decisive 30 second victory. Anna Cleaver couldn’t foot it with Samantha Warriner but she was too classy for the rest of the field recording a comfortable second place ahead of the trio of Nicole Cope, Fiona Docherty and Debbie Tanner finishing within seconds of each other after their hard fought encounter over the 5 kilometres on the road.

It was Bevan Docherty and James Elvery who ended up running away from the men’s field as they set a cracking pace out to the turn and then on the return it was the strength of Bevan Docherty into the headwind that allowed him to ease ahead and go on and take the win. James Elvery has been knocking on the door for a win all season long but once again he is forced to settle for second place but still secures more of those valuable points in the Grand Prix. Sam Walker was having his best race to date as his turn of speed on the run lifted him to a podium position but he had to work all the way as Thomas Hahn was just one second behind at the line. Paul Angland was another to have his best result running through the field to come home in fifth place.

There may be just one race to go but the point’s situation is far from settled in the Stroke & Stride Series Grand Prix. Current Series Champion Brent Foster’s lead has now been trimmed back to just 12 points by James Elvery while Bevan Docherty’s victory sees him overtake Reto Waeffler and Hamish Carter and move into third position. Also in the money at this stage are Sam Walker, Thomas Hahn and Carl Cairns. Samantha Warriner is currently sitting pretty on 97 points but her lead is not unassailable as Anna Cleaver and Nicole Cope are still threats for the overall title this season. As in today’s race, again still locked in their arm wrestle for fourth and fifth are Debbie Tanner and Fiona Docherty while next in line are Taryn McLeod, Nikki Wallwork and Marisa Carter. All of the above will be looking for a big race to finish the Series.