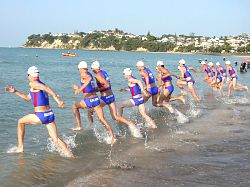 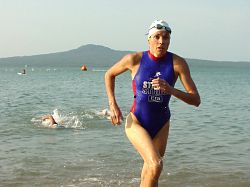 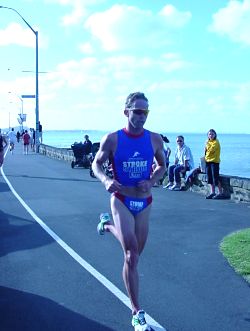 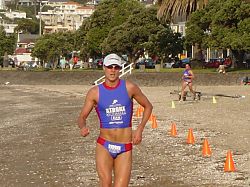 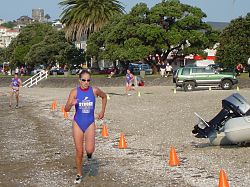 The sixth event in the Reesby & Company Stroke & Stride Series is tagged as a race for the runners with just a 500 metre swim preceding the 5 kilometre run. But when an athlete the calibre of Hamish Carter is racing it is irrelevant if the course favours a swimmer or a runner because he has demonstrated that can execute both disciplines in sublime fashion.

The weather always plays a big part in a Stroke & Stride with the late afternoon start often subjecting competitors to a rough sea and windy run course. For this event Auckland City turned on a sparkling day at St Heliers Bay and any wind early on was non-existent by race start. The Waitemata Harbour had hardly a ripple as it stretched out in the lazy afternoon sun towards Rangitoto Island and the Pro Men’s field made quick work of the swim course with that man, Hamish Carter leading the way around the buoys and hitting the beach in a fraction over six minutes. Even swimming sans wetsuits a swim of this distance can’t do much to break up the field and he was soon followed into the transition by Dean Foster, James Elvery and Bevan Docherty. Another couple of seconds adrift was Reto Waeffler and then Carl Cairns and Thomas Hahn.

Two minutes after the men the women’s Pro field started. They were also racing without their wetsuits and they also sped around the buoys with Rebecca Nesbit leading the way in 6 minutes and 12 seconds. All on her own in second place was Anna Cleaver followed twenty seconds later by Debbie Tanner and Samantha Warriner. Also in touch at this stage were Fiona Docherty and Nicole Cope, both eagerly anticipating the 5 kilometre run and they were trailed by Carmel Hanly and Nikki Wallwork.

Out on the run course Hamish Carter immediately had his foot hard on the accelerator as he extended his lead on the way to Mission Bay going on to clock the fastest run split of the day and his second victory in a row in the Series. Bevan Docherty fought gallantly to peg back Hamish Carter’s lead but it wasn’t going to happen this day, as he had to settle for second place. James Elvery and Reto Waeffler had their own tussle out on the road with James Elvery snaring the third place just 10 seconds ahead of Reto Waeffler. Thomas Hahn doesn’t mind mixing it up with the older guys one little bit and held out Paul Angland for fifth.

After sharing the wins around through the first four races, last fortnight Samantha Warriner put her hand up with a second win emphatically declaring that she was the hot athlete for this season. This week her deficit at swim’s end was soon erased early into the run as she turned the heat up even more running away with her third win for the season. Another athlete whose form had come good for this race was Fiona Docherty having her best result of the season matching Samantha Warriner’s run split on the way to a fine second place finish ahead of previous race winners, Anna Cleaver and Nicole Cope. Debbie Tanner scored more valuable points for her fifth placing ahead of Nikki Wallwork and swim leader, Rebecca Nesbit.

The Series Grand Prix now reaches a critical point with six events completed. The big mover in the men’s field is Hamish Carter with his two victories elevating him into fourth place. James Elvery on 66 points in 3rd is just one point behind Reto Waeffler so these two can be expected to shoot it out over the final two events. Of course sitting on top of the table is the reigning Series Champion Brent Foster looking almost impregnable on his 97 points, but it’s not over until Race #8 is in the books so watch this space. Winning two in a row has also done great things for Samantha Warriner’s standing in the female’s table as she now leaps 12 points clear with a total of 94 points. Anna Cleaver is chasing all the way in second but she also can’t relax with Debbie Tanner only 4 points behind while the ever present threat of Nicole Cope and Fiona Docherty can never be discounted.