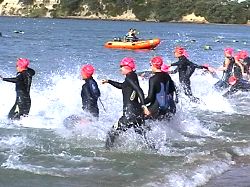 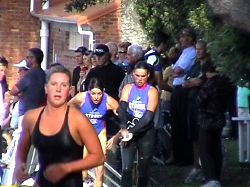 One of the most cosmopolitan fields in many years was entered in Race #5 of the Reesby & Company Stroke & Stride Series with representation from many countries from around the globe. There are certainly worse places you can be at this time of the year and a fine summer’s day in Auckland is difficult to beat; add in a fiercely competitive Stroke & Stride in the afternoon and it’s about as good as it gets. Casting an eye over the talented field of Pro competitors lined up on the beach it was also shaping as one of the strongest fields assembled in recent times with the promise of enthralling racing to follow.

The steady offshore breeze blowing ensured conditions on the water were flat and fast which helps to keep the field more condensed during the 750 metre swim at St Heliers Bay. Out on the water the fastest three female swimmers did their best to stretch out the field as much as they could as they wound up the pace. Only nine minutes after the start in the leading up the beach into transition was the seriously swift Rebecca Nesbitt and Anna Cleaver closely followed by Rebecca Linton. A little further back was Jillian Wood and then Debbie Tanner lead in a large chase bunch of contenders including Samantha Warriner, Heather Evans, Marisa Carter and Taryn McLeod.

The first half of the four kilometre run to Mission Bay was hindered by the head wind on the way to the turnaround cone but then on the homeward leg this same wind was ready to lend a hand helping to propel the athletes towards the finish. Anna Cleaver ended up doing all the hard yards leading early on but by the final kilometres it was the superior leg speed of Heather Evans and Samantha Warriner that resulted in these two celebrated athletes sprinting shoulder to shoulder as they came back into view at St Heliers Bay. The final 200 metres of the run involves a tight turn as runners run down the ramp and onto the beach and this was where Sam Warriner threw in a final kick opening up the slightest of gaps going into the finishing straight. This gap proved to be decisive as she held on to win the race by just a couple of metres over Heather Evans. Just ten seconds back in third place was Anna Cleaver while the fastest run of the day carried Nicole Cope up into 4th place. These first four finishers had each won one race going into this event. Therefore a second victory for Sam Warriner was key to her grabbing vital points which elevates her to the head of the Grand Prix now leading Anna Cleaver and Debbie Tanner who are tied in second place only seven points adrift.

Just for a change the men’s field didn’t have Brent Foster to chase around the buoys and it was in fact another accomplished swimmer Hamish Carter leading the way over the final 100 metres as the lead pair returned to the shore at swim’s end. Brent Foster edged ahead of Hamish Carter just as they hit the beach and in third place a few seconds in arrears was Dean Foster. Tick off another few seconds and then it was Will Green who had the pleasure of towing a large pack of men around the swim course and heading through transition looking for a quick change was the group that included Reto Waeffler, Carl Cairns, Bevan Docherty, Andrew Doreen and Oliver Tompkins. A few metres into the run leg and the race was decided as Hamish Carter quickly stamped his authority on the event as he accelerated away to record his first victory of the season plus snaring the fastest run split along the way just to underline the result. Nothing much wrong with Bevan Docherty’s running either as he ran through for second place ahead of Brent Foster in an unaccustomed third place. Next to finish was the first of the international competitors we mentioned earlier with the very consistent Reto Waeffler representing Switzerland heading home Sam Walker. This consistency has elevated Reto Waeffler to second place in the Grand Prix points but he and everyone else is still a long way behind Brent Foster sitting atop of the table on 95 points.