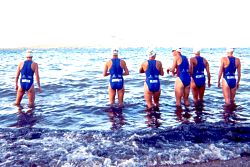 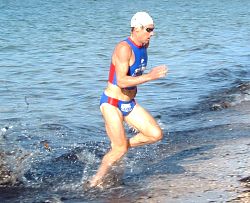 The first event of 2003 in the Reesby & Company Stroke & Stride Series was held on a glorious Auckland summer’s day with blue sky and plenty of sunshine set against the sparkling waters of the Waitemata Harbour gently lapping the shore. The pro field were racing without wetsuits for this event and the men were the first to start. As they lined up along the beach at St Heliers Bay awaiting the gun it was obvious to all that one competitor was standing well to the right of the other contestants. Was this man alone adverse to the company of others or had he plotted his own course to take him out to the first buoy? With “FOSTER” printed on the back of his swimsuit it was a strong clue that this could well be the man to watch. And watch is just what the rest of the field ended up doing as Brent Foster opened up a 10 second gap at the first buoy which he extended to more than half a minute by the end of the 1000 metre swim. Hamish Carter and Bevan Docherty were both having their first race of the season and did their best to stay close during the swim but ended up giving away more time than they would have liked to the flying Fozzie.

The women’s pro field also had a flyer in their midst and at swim’s end it was Rebecca Linton who again proved to be the best of the best in the water opening up a 26 second lead over those other outstanding swimmers, Rebecca Nesbit and Anna Cleaver. It was then a full minute back to Samantha Warriner and Debbie Tanner who were followed in by Taryn McLeod, Marisa Carter and Fiona Docherty.

The three kilometre run around the waterfront to Kohimarama Beach and return is little more than a sprint and there’s not a lot of distance to obviate any time lost during the swim. Even more difficult when the person you’re chasing is running like a man possessed as Brent Foster pinned his ears back and tore out of transition like he’d just robbed a bank. Hamish Carter backed up his swim with the fastest run of the day but he was still in second place at the finish as Brent Foster claimed one more victory in a Stroke & Stride. Bevan Docherty held on to his third place but it was Clark Ellice that did most damage on the run improving his position to fourth ahead of Reto Waeffler.

In the first three events of the season the winner of the women’s race had been different on each occasion with Nicole Cope, Samantha Warriner and Heather Evans each recording a win. Early into the run and it was looking as if it could be Anna Cleaver who would swell our trio of winners into a quartet as she ran herself into first place on the return to St Heliers. But stalking her was Samantha Warriner keen to grab a second victory for the season. In the end Samantha Warriner did capture the fastest run split on the day but she couldn’t catch the delighted Anna Cleaver who triumphed in Race #4 with a fine victory. Third place went to our swim leader Rebecca Linton with her best finish of the season holding on to the podium spot just seconds ahead of Debbie Tanner and Fiona Docherty.

At the half way point in the Series, the Grand Prix is wide open for the women’s field with a handful of competitors all vying for the top spot and separated by the smallest of margins. Currently Debbie Tanner (3rd, 3rd, 4th & 3rd) has the most points on 56 but is only two points clear of Samantha Warriner (1st, 2nd & 2nd) who is in turn only two points ahead of Anna Cleaver (2nd, 3rd & 1st) and then Nicole Cope (1st, 2nd & 6th) closely follows them on 47 points. This race is going down to the wire. Meanwhile on the other side of the table Brent Foster (1st, 1st, 1st & 1st) hasn’t won the men’s title just yet but he’s looking pretty damn good with his perfect four from four and 80 points. James Elvery (2nd, 2nd & 2nd) is next on 51 points and then Clark Ellice (3rd, 4th & 4th) and Reto Waeffler (3rd, 3rd & 5th) are tied for third with 41 points. Further down the list there are six men tied on nine points, fortunately we still have four more events to sort out the best of the Series for this season.