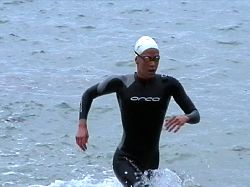 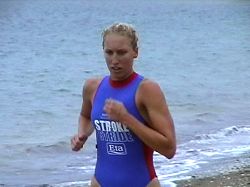 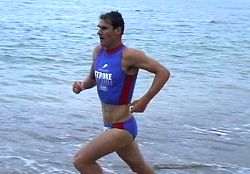 When the Christmas edition of the Stroke & Stride rolls around at year’s end it shouldn’t be surprising to have Father Christmas drop in for some action and it is only appropriate for him to end up handing out a bunch of goodies from his sack at the prize giving. What doesn’t ring true is when during the race Santa takes command of the commentary microphone and then proceeds to call the race in expert fashion. Has the Stroke & Stride got a following even up at the North Pole? And what has Santa been up to in the past 12 months? He does appear to have lost a lot of weight and now gets around with quite an athletic spring in his step. Are we likely to see the jolly fellow in red racing before the end of the season?

Christmas may be upon us but for the Pro Division at Race #3 in the Reesby & Company Stroke & Stride Series the holiday season was still one more race away and the season of good will was on hold until race end. Rebecca Nesbit’s wish for Christmas was a long swim and short run and with a 1000 metre swim and a 3 kilometre run on the menu she was smiling all the way to a 30 second lead over rest of the women’s field by the time she exited the water and ran up the beach into transition. The rest of the field were well strung out with Anna Cleaver next in and then Jillian Wood, Heather Evans, Debbie Tanner and Samantha Warriner making up the top six. These six were not challenged by the remainder of the women but certainly had a battle of their own out on the run course to decide the final finish order. Coming back into sight on their return from Kohimarama it was Heather Evans, in her debut race of the season, that had taken the lead which she held to record her first ever Stroke & Stride win staying ahead of Samantha Warriner who had won Race #2 a fortnight earlier. Anna Cleaver couldn’t match the leg speed of these two but was certainly strong enough to hold third ahead of the ever consistent Debbie Tanner. Then came Rebecca Nesbit and Jillian Wood, both recording their best results of the season to date.

Way back in December 1992, Brent Foster lined up on the beach at St Heliers Bay to win his first ever Stroke & Stride event which he went on to lead from start to finish. Ten years later he may be a little bit older but certainly no slower and he’s now lining up against a whole new throng of challengers but his game plan remains the same; go out as fast you can and don’t look back. The past decade has seen Brent rack up an incredible 43 individual victories and victory number 44 would do him just nicely as a Christmas present at today’s event. The swim conditions were surprisingly good despite the onshore breeze but the 1000 metre distance was still sufficient to give Brent Foster a 30 second lead over Oliver Tompkins and then another 20 seconds to the other contenders lead in by Will Green. Once again it was James Elvery charging the hardest in pursuit of Fozzie and he ran through the field to take second place for the third race in a row. Reto Waeffler repeated his third place from a fortnight earlier with then Clark Ellice heading home newcomer Thomas Hahn, followed by Sam Walker. But the day, as has the decade, belonged to the man that has made the Stroke & Stride his own. Brent Foster followed his race strategy to perfection and the closest any of his competition would get to him was standing on the start line as a he swam and ran his way to yet one more victorious Stroke & Stride result.

After the first three events the leading points tables for the Stroke & Stride Grand Prix could not be more dissimilar. In the men’s it is all looking very ordered with Brent Foster on top with his three wins followed by James Elvery with his three second places, then comes Carl Cairns, Sam Walker, Reto Waeffler and Clark Ellice all separated by a handful of points. Whereas over in the women’s it is Debbie Tanner with a six point buffer over Nicole Cope and Samantha Warriner who each recorded a win in the first two events and then comes Anna Cleaver, Anna Elvery and Nikki Wallwork with the only sure prediction being that it is early days and this division is still wide open.