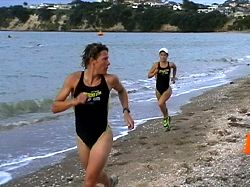 The 100th ever Stroke & Stride was a milestone for the sport of SWIM/RUN and a celebration for the long running series of races held in Auckland, New Zealand each summer. While this festival type atmosphere was prevalent throughout the event it was also the final and deciding race in the Reesby & Company Stroke & Stride Series for the season. Therefore, while there were smiles were all round there was also a large number of athletes digging deep one more time to secure their overall placing in the Series and a share of the $20,000 prize purse.

For the season finale athletes faced a 1000 metre swim, sans wetsuits at St Heliers Bay, and then a flat and fast 4 kilometre run around the bays hugging the Waitemata Harbour shoreline.

The men’s field were lead around the triangular swim course by a pair of swimmers and as a number of the spectators had correctly guessed it was Brent Foster and Craig Stewart who emerged from the water in just on 12 minutes having opened up a 40 second lead over the tightly grouped chase pack. These pursuers were lead in by Stephen Peterson and then followed Jeremy Gray, Csaba Kuttor, Szabolcs A’Goston, Terenzo Bozzone, Bevan Docherty and Oliver Tompkins. The women’s field was started soon after the men and once again the crowd was right on the money with their selection when Rebecca Nesbitt jumped clear of the others and enjoyed a 43 second lead over Anna Cleaver running up the beach and into the transition area. Debbie Tanner was next in and was soon followed by Leigh Webster, Kirsty Whiting, Samantha Warriner, Abigail Wroe and Vanessa Palmer.

After observing the previous seven events over the summer, the Stroke & Stride audience was by now becoming expert at picking the form athletes on the day. After their good result in the swim, opinions were now mixed as to the order of the placegetters at the end of the run leg. Each of the four events in 2002 had resulted in a different winner for the men’s field and three of these, Brent Foster, Szabolcs A’Goston and Bevan Docherty, were now in the running to score one more victory. Into the final kilometre Brent Foster still held the lead but it was Bevan Docherty who had made the big gains on the run and had moved into second while Szabolcs A’Goston keenly held third. Down onto the beach and in the charge for the finish line it was Bevan Docherty who was the best on this day finishing six seconds clear of Brent Foster. Athletes from Hungary had really made their presence felt in the Stroke & Stride this season and this time it was Szabolcs A’Goston in third leading in his countryman, Csaba Kuttor ahead of the inform Terenzo Bozzone.

This season the women’s field saw an amazing six different winners from the first six races but then Samantha Warriner had scored a second victory at Race #7 a fortnight ago which had elevated her to favourite starting this event. Out on the run course previous Series Champion Debbie Tanner was intent on upsetting this pick as she ran herself into the lead. At the final turn and with 400 metres to the finish, Samantha Warriner was now up into second and looking ready to pounce for another victory. Up the beach to the finish it was a jubilant Sam Warriner edging just ahead of Debbie Tanner to record the win and take out Stroke & Stride #100. Anna Cleaver announced her return to racing after a 3 month absence with a strong third ahead of a contented Kirsty Whiting followed in by Nicole Cope.

With the Series now at end for another season the points could be tabulated in the Grand Prix that decides the Stroke & Stride Series Champion. The women’s field had never before been so hard fought with a number of athletes all capable of taking the overall honours. In the end it was Kirsty Whiting (2nd, 3rd, 1st, 2nd, 3rd & 4th) on 97 points receiving the Stroke & Stride Cup and title for the first time with a fine display of brilliance and consistency. Debbie Tanner (3rd, 2nd, 2nd, 3rd, 4th & 2nd) was so close and only 3 points behind at the finish. After a slow start Nicole Cope (6th, 5th, 1st, 2nd, 2nd & 5th) came through to take third ahead of early Series leader, Vanessa Palmer (2nd, 4th, 4th, 4th, 5th & 7th). The winner from Race #1, Julia Scopes ended up tied with Samantha Warriner for 5th place while Leigh Webster had a one point advantage over Rebecca Nesbitt for 7th and 8th.

No one could ever say that winning the Stroke & Stride Series is easy but someone who appears to give that impression is our now eight time Series Champion and SWIM/RUN sensation Brent Foster (1st, 1st, 1st, 1st, 2nd & 2nd). Once again Fozzie gave the very talented Men’s field a dazzling lesson of his hard charging style of racing and his never-ending consistency that has seen him win 41 Stroke & Stride races and never ever finish worse than second. Having a tremendous debut season was Bevan Docherty (2nd, 2nd, 4th, 2nd, 1st & 1st) who claimed second place with his win in the final event. The Stroke & Stride has hosted large numbers of talented international athletes over the years but this is the first time that overseas’ competitors have made a concerted assault on the overall Series honours. Szabolcs A’Goston (3rd, 3rd, 1st, 3rd, 2nd & 3rd) from Hungary lead the way as he snared a healthy portion of the prize money on offer on his way to third place in the Series. Proving that last season’s third place was no fluke was Terenzo Bozzone (6th, 3rd, 5th, 5th, 4th & 5th) as he again footed it with his older peers. The other half of the Hungarian invasion was headed by Csaba Kuttor (5th, 3rd, 4th, 3rd & 4th) who took out fifth in the Series ahead of Scott Larsen. In seventh place Clark Ellice headed James Elvery by just the solitary point.